Each year I plant something new in my garden. This year I tried a couple new crops: cucumbers and watermelons. The verdict is still out on the watermelons as they have a number of weeks left to grow, but the cucumbers have already arrived in full force! I try to plant foods that I like and will eat, so you will probably not catch me growing beets and okra. (I hope these vegetables aren't offended, but they just don't float my boat.)

I do like cucumbers, but what do you do with all those cucumbers? Easy...pickles! I tried this pickle recipe for the first time a few weeks ago and took a couple jars with me to a family gathering over the 4th of July. They were a smashing success! This recipe does not require a formal "canning" process, so you don't need to worry about water baths and pressure cookers. You just let it hang out in the window sill for a couple days so that it pickles, and voila -- a delicious, crispy pickle great for sandwiches, hamburgers, brats, or just a snack!

Here's how you get started:

1.  Preparing the Cucumbers: Wash off your cucumbers to remove any dirt, and then cut your cucumbers in either spears or slices. You can use a knife, but if you have a mandoline, that's an easy way to cut the cucumber into chips.

Even though you aren't "canning" the pickles, you need to make sure your jars are clean. So, run them through the dishwasher, or wash them with hot, soapy water. I recommend using mason jars (or any other type of clear, glass jar). One of the jars I used was an old honey jar that I had, obviously, cleaned out. Make sure you have lids for the jars.

2. Packing the Jars: Before you place the cucumbers in the jar, you can add some flavoring -- or spices. I made hot pepper garlic pickles, so I put a clove of garlic and some diced cayenne peppers on the bottom of the jar. After putting your flavors on the bottom, take the cut up cucumber and arrange them in the jars making sure to pack them in tightly so you can get as many in as possible. Be sure to leave approximately 1/2" of space at the top of the jar. You can add more flavoring (i.e., garlic and hot peppers) to the top if you'd like. 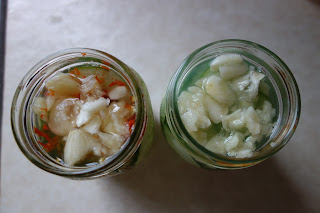 3. Making the Brine: Vinegar is an essential ingredient in the pickling process. So, next you will make a liquid mixture (or a brine) that includes water, vinegar (white or apple cider), and salt. Depending on how many jars you are making will determine how much liquid to make. The water to vinegar ratio is 1:1, so if you add 1 cup of water, then add 1 cup of vinegar. (Now, I prefer a slightly less "vinegary" pickle, so you can reduce the amount of vinegar in it if you'd like.)

Add 1 tablespoon of salt for every 1 cup of water (give or take depending on how salty you would like the pickles). It's my understanding that the salt does not affect the pickling or canning process; it's simply used for taste. I used regular table salt or sea salt. Many recipes will call for a special canning salt. I presume you would need this if you were going to store these jars for a long period of time. But if you wanted to store these pickles, then you would need to go through sterilizing the jars and the water bath canning process. We ate these pickles within a week, so I wasn't worried about using canning salt or sealing the jars.

So, boil your brine on the stove in a saucepan. Once it has reached a boil, you can pour the liquid mixture in the jars on top of the sliced (or speared) cucumbers making sure to leave 1/2" of room at the top of the jar. 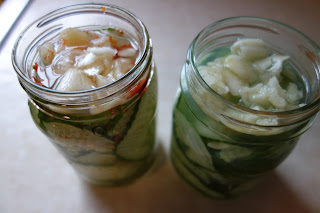 4. Let the Pickling Commence! Finally, place the lid on top of your jar and let it hang out in a window sill for 3-4 days. You could also put it in your refrigerator, but it may take a little longer for the pickling process to occur. After the 3 or 4 days sitting out, you can put the jar in the refrigerator, and it should keep for a couple weeks. But, if you're anything like my family, those will be gone in a matter of days! 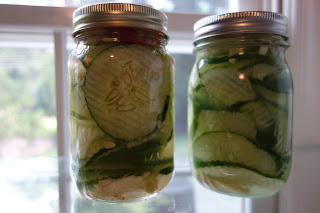 Enjoy these crisp pickles on hamburgers, brats, and sandwiches!