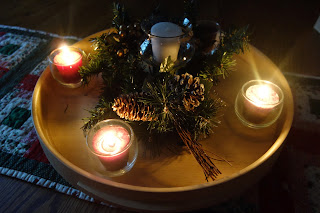 The third week of Advent represents "joy". Each day you will light two purple candles and the rose candle. So often I look to other people to give me joy. If my husband disappoints me by coming home late from work or if a friend doesn't return my phone call, it's easy for me to get down and discouraged. I allow my circumstances to dictate my emotions, and my joy easily vanishes. Certainly I love my husband, children, family, and friends, but I should not rely on them to bring me joy. I must remind myself that my source of joy comes from God and God alone. He is always loving and never changing. He never fails.

Christmas Question of the Week

Each week, I will attempt to answer a question about why we celebrate a particular Christmas tradition. I don't intend to answer all of the questions in my posts over the next few weeks, but I do hope to answer a few questions.

Who is Santa Claus?

Most people in the western world know Santa Claus as a mystical, jolly man with a white beard and a red suit who visits our homes on Christmas Eve and delivers presents to good little boys and girls. Some people may know of traditions around the world that include characters such as Father Christmas and Sinterklauss. (You can find a brief synopsis of this on Wikipedia...I know, I know. It's not the best source.) Many people may not know that Santa Claus originates from an actual person: Saint Nicholas. Saint Nicholas was a Christian bishop in modern day Turkey who was known for his generosity. He was a very godly, Christian man whose generosity was rooted in his love for Christ. (Check out Advent: Week 1 for an explanation of "Why do we exchange presents?)
The information I found on Wikipedia aligned with a recent children's Christmas video I watched with my son: Buck Denver Asks...Why do we Call it Christmas? I loved this short movie and thought it did a nice job of  explaining many Christmas traditions such as "why do we put up Christmas trees?" and "who is Santa Claus?" My 2 1/2 year old was engaged, and I found it entertaining and informative. The creator of this movie, Phil Vischer, is the same person who created Veggie Tales. It's definitely worth checking out!

Each day throughout Advent, my family will take a few minutes to read a passage from the Bible and talk about what it means. During this time, we will light our Advent "wreath". During the third week,  two purple candles and one rose candle will be lit each day during this time. The schedule below details the daily passage as well as a short description and application question. Most of this is based upon the Jesse Tree, which includes a clear, succinct overview of Jesus's ancestry and life in the Bible. Even if you don't have Jesse Tree ornaments, you can use pictures or different items around your house to represent the symbol for the day. No matter your age, I hope you glean something from these readings. 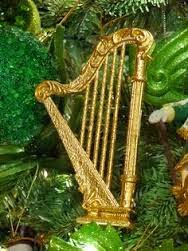 Symbol: Harp
Scripture: 1 Samuel 16:1-23
Explanation:  Last week we learned about Samuel anointing King Saul to lead God's people, but even he was not perfect. So, God told Samuel to anoint another king: David. David was just a young man and the youngest son of Jesse. As we learned in the first week, Jesus would be born through the lineage of Jesse (and through King David). Although David did many honorable and noble things for the Lord, David still made many costly mistakes in his life. No one is perfect. Except one. Jesus. He is the one true king!
Question: Is there one person who you turn to in life to lead you or guide you? Has that person ever failed you? Have you considered turning to God for counsel and wisdom through life's decisions?

Scripture: 1 Kings 18:16-46
Explanation:  God is mighty and powerful. He used a man named Elijah to put His power on display. Elijah lived during a time where people worshipped other gods (Baal) besides The Lord. But Elijah knew these other gods were not real and could not satisfy. He put their gods to the test, and they failed miserably. Elijah provided an opportunity for God to put His power on display, and God showed up in a BIG way. Through Elijah's one prayer, God burned a water-logged alter to a crisp. The people knew God was real and began to praise and worship the one true God.
Question: Is there something in your life that is competing for God's attention? 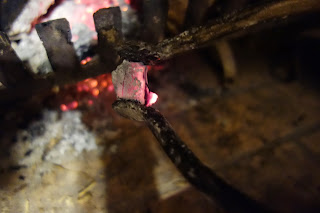 Symbol: Fire Tongs with Hot Coals
Scripture: Isaiah 6:1-13
Explanation:  Isaiah was one of the prophets who foretold the coming of Jesus. In this passage, Isaiah sees a picture of him before The Lord. Isaiah realizes that he is not worthy to be in God's holy presence. A seraph (or angel) comes to Isaiah and touches his lips with a burning coal. The angel says "your guilt is taken away and your sin atoned for" (v. 7).  Before any of us can stand before God, we must be cleansed. God is holy and perfect and cannot be in the presence of anything imperfect. Unfortunately, nothing we ever do (or don't do) will make us worthy to stand before God. The Good News is that Jesus makes a way for us! Jesus was perfect on our behalf. He lived a perfect life; never lying, gossiping, or even thinking a bad though. He became the perfect sacrifice when He died on the cross for us. He paid the penalty for all of our sins -- past, present, and future. So, when we stand before God, God does not see our imperfections; He sees the perfect record of Christ.
Question: Is there something in your life that you should be "cleansed" of? Take time to ask God for forgiveness. He loves you and is waiting to accept you with open arms. 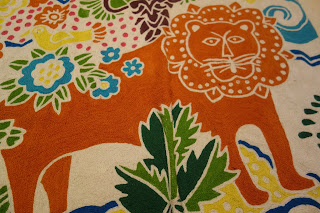 Scripture: Daniel 6:1-28
Explanation:  Daniel was a man that loved God and followed him...no matter the cost. Even though it was against the law to pray to God, Daniel did it anyway. He knew that God's approval was more important than the approval of man. Because he broke the king's law and prayed to God, the king -- albeit reluctantly -- punished Daniel by throwing him into a lion's den. Miraculously, God protected Daniel and closed the mouth of the lions. This could have been a horrible end to Daniel's life, but God used this situation for His glory. Many people saw God's goodness through this event.
Question: Has there been a time in your life that God protected you? 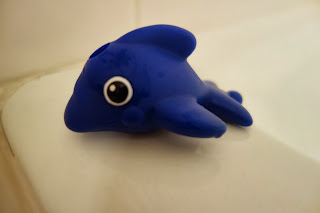 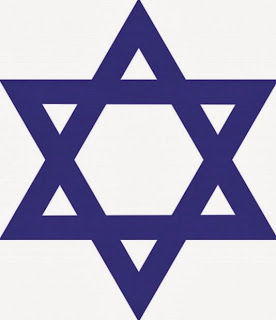 Scripture: Esther 4 - 8
Explanation:  Initially, Esther became queen because of her great beauty, and unbeknownst to the king, she was a Jew. During her time as queen, the king declared an edict to kill all of the Jews. Esther's cousin, Mordecai, encouraged her to approach the king and stand up for her people. He challenged her to think that perhaps she is in this position of power for "such a time as this" -- to fight for the Jewish people (Esther 4:14). In most instances, standing up to the king would mean certain death, but Esther took a stand and approached the king. The king granted Esther's request, and the Jewish people were saved. Many people use a position of power for their selfish gain, but Esther used it for God's glory to save the Jewish people.
Question: Have you ever been in a position of power and needed to make a tough decision? 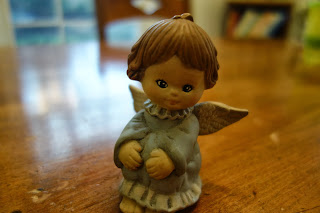 Symbol: Angel
Scripture: Luke 1:26-38
Explanation:  The angel, Gabriel, delivered a message to Mary and told her that she would become pregnant and give birth to the Son of God. How could this be? She was a virgin. Her response: "I am the Lord's servant" (v. 38). She had a lot at stake when she told God she was willing to carry the Christ-child. She was just a young girl.  She risked her engagement, her reputation, and even her life; but, she humbly accepted God's request.
Question: Can you imagine if Mary had said no?  Where would that leave us?