Here's this week's Flashback Friday where I dig up an old post. If you haven't seen it before, then it's new to you! These daily Advent readings help me set the proper tone for the Christmas season in my home. I hope you enjoy them as well! 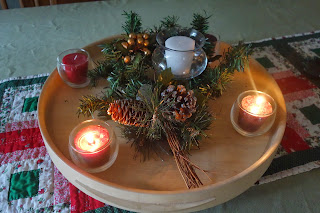 
Last week we began the celebration of Advent! I did some additional reading about Advent this week and found out that each week represents something different. The first week of Advent symbolizes "prophesy" where we remember those that foretold the coming of Jesus. This week, the second week, represents "love". So each day you light two purple candles, reflect on the fact that God loves you so much, and He expressed this love by sending His one and only Son to this world for you.

Christmas Question of the Week

Why do we hang Christmas wreaths? 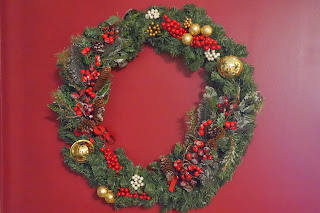 Throughout history, the wreath has been a part of various traditions, cultures, and governments. This circular object has no beginning and no end, which oftentimes represents eternity. In the context of Christmas from a Christian's perspective, the wreath symbolizes the continuous love of God found in Christ.

So each time I see a wreath hanging on a door or in a store this Christmas season, I will be reminded of God's never-ending, always and forever love.

Each day throughout Advent, my family will take a few minutes to read a passage from the Bible and talk about what it means. During this time, we will light our Advent "wreath". During the second week,  two purple candles will be lit each day during this time. The schedule below details the daily passage as well as a short description and application question. Most of this is based upon the Jesse Tree, which includes a clear, succinct overview of Jesus's ancestry and life in the Bible. Even if you don't have Jesse Tree ornaments, you can use pictures or different items around your house to represent the symbol for the day. No matter your age, I hope you glean something from these readings.

Symbol: Coat of Many Colors
Scripture: Genesis 37
Explanation:  Last week we learned about Abraham's son, Jacob. Today we read about Jacob's sons; one in particular: Joseph. Jacob loved his sons very much, but he loved Joseph the most. He gave Joseph an ornate, colorful robe because he loved him so much. This made Joseph's brothers very jealous, and they plotted to get rid of him. They sold Joseph as a slave and destroyed his beautiful robe. Joseph may have felt hopeless and abandoned at this point in his life. Can you believe that God used that awful situation for His glory? There is a reason Joseph was sold into slavery; God needed him in Egypt!
Question: Do you believe God can use bad situations for good? Think of a difficult time in your life that you can look back on now and realize something good came from it.

Symbol: Burning Bush
Scripture: Exodus 2:1 - 4:20
Explanation:  After Joseph was reunited with his family, they stayed in Egypt, but generations later, his family (the Israelites) became slaves in the land. The Israelites cried out to God for help, and He answered! God used an unassuming man named Moses to free the Israelites from the pharaoh's rule. God spoke to Moses  through a burning bush. He told Moses to go to the pharaoh and demand freedom for the Israelites so that they may worship Him. After fervent petitioning, the pharaoh reluctantly released God's people.
Question:  Was there a time in your life that you called out to God for help? Did he answer you?

Symbol: Lamb
Scripture: Exodus 12 - 14
Explanation:  Before the Israelites left Egypt, God instructed the people of Israel to slaughter a lamb for each household and put its blood on the door frames of their homes. That night God would go through Egypt and kill the first born male -- of animals and of men -- in the households as a judgement on Egypt for the mistreatment of God's people. The blood on the door frames was a sign to God to "pass over" the Israelites' homes. God protected His people and safely led them out of Egypt.
Question:  When was there a time in your life that you felt God's protection?

Symbol: Ten Commandments
Scripture: Exodus 20
Explanation:  The Israelites were free from slavery in Egypt, but they still weren't satisfied. They were dirty, tired, and hungry. They thought their ways were better than God's ways, and their trust in God was fading. God wanted the Israelites to know Him and trust Him. One way to know God more is to live like God. So, God gave us a set of rules, or commandments, so that we can live more like Him and show others what God is like. God calls us to first love Him more than anything else. If we seek Him first with our whole heart, then everything else in life falls into place. [Matthew 6:33] This set of rules is a tall order to fill. We could not abide by this list if we tried with all of our might. That is why Jesus is necessary; only He can follow these rules perfectly.
Question:  Can you think of a time you bent your own rules to get what you thought you needed?  Were you satisfied with the result?

Symbol: Trumpet
Scripture: Joshua 6:1-20
Explanation:  Moses led the Israelites for many years, but after his death, God put Joshua in charge of His people. They were tired of wandering in the desert and were ready to reach their new home. However, the city of Jericho was between them and the promise land. God had a plan for the Israelites to defeat this fortress of a city, but it wasn't by conventional means. God instructed the people of Israel to walk around the city once a day for six days and have seven priests carry trumpets of rams' horns. On the seventh day, He told them to march around the city seven times and then the priests should blow their trumpets. After the trumpets sound, all the people should shout at the top of their lungs! Then, the wall will come tumbling down. That is what they did, and that is what happened. God delivered on his promise; the Israelites captured the city of Jericho; and they entered into the promise land.
Question:  Has God ever asked you to do something completely unconventional?  Did you follow his instruction?

Symbol: Sheaves of Grain
Scripture: Ruth 2:1-9
Explanation:  Naomi and Ruth formed a special bond as mother and daughter-in-law. Naomi lost her sons, one of which was Ruth's husband. So, now they were both widowed, and their future seemed bleak. God had another plan for their lives. Ruth met a kind landowner, Boaz, while she was gleaning sheaves of grain in the field. Ruth immediately found favor in the eyes of Boaz, and they eventually married. This brought joy to Naomi, and this confirmed God's faithfulness to her. The family line continued on to the birth of Christ through Boaz and Ruth.
Question:  Have you experienced a time in your life when you thought all hope was lost? What did you turn to in that situation?

Symbol: Crown
Scripture: 1 Samuel 9:15 - 10:9
Explanation:  God's people, the Israelites, finally had their new home in the promise land, but they were still discontent. Now, they wanted a leader, a king. Samuel had been a judge over Israel, but that wasn't good enough for God's people. So, God told Samuel to anoint Saul as the king of Israel. Although God's people got what they asked for, their leader, Saul, still failed them. There is only one who will never fail, and his name is Jesus.
Question:  Have you ever put your hope in a leader who failed you?  Why did they fail you?

All Advent Posts:
Posted by Unknown at 3:00 AM